You are here: Home > Things to Do > Cotehele 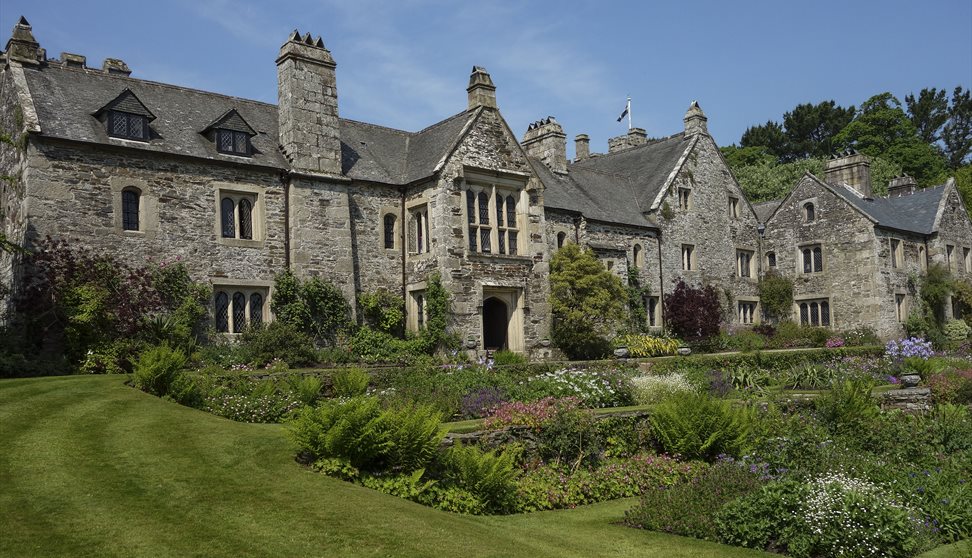 The garden at Cotehele is now open. You'll need to book your tickets by 3pm the day before your visit. Members can book for free, while non-members will need to pay when booking. Tickets will be released every Friday. Please note they will be turning people away who arrive and haven't booked.

Built in medieval times, the current house is mostly Tudor. Make your way through four floors of history to view the collection and learn stories about the Edgcumbe family who owned Cotehele for 600 years.

This fortified manor house is set on a high bluff on the Cornish bank of the river Tamar, which gave natural protection from skirmishing armies approaching from the east. Inside the rambling stone walls you'll find a fascinating collection that reflects the antiquarian taste of the Georgian Edgcumbes. The family developed the interiors between about 1750 and 1860 in a deliberate attempt to evoke a sense of nostalgia and recreate the atmosphere of the 'good old days'.

The house is an architectural hotchpotch. The chapel was first consecrated in 1411, and was re-modelled in the early 1500s when the clock was installed. It is the earliest turret clock in the United Kingdom still working in an unaltered state and in its original position. At a similar time the Great Hall was widened, ‘squashing’ the chapel into a corner.

There’s something new in the garden for you to discover 365 days of the year. Spanning 14 acres plus 12 acres of orchard, it has variety far beyond the average garden on account of its terrain, rills and juxtaposition to the house. Beyond the Upper Garden, with its pond, lie the Orchards. The formal Terrace Garden lies below the East wing of the House. A tunnel from the formal terraces leads to the steep and wild Valley Garden with a path curving down to a thatched Victorian summer house, a medieval stewpond and dovecote. A gate at the bottom takes you to the Chapel-in-the-Wood, built by Sir Richard Edgcumbe I, and inside the building you'll find details of the lucky escape which led him to build it. A path leads from the Chapel to Cotehele Quay.

The historic Cotehele Quay on the River Tamar is home to the Discovery Centre, the Victorian Tamar sailing barge 'Shamrock' and the Edgcumbe tea-room. Shamrock is the only fully-restored ketch-rigged Tamar sailing barge in the world. She was built in Plymouth in 1899 to carry cargo on the river. She now spends her retirement on Cotehele Quay. You can read about her history and see loads of photos on her blog here. A short walk from The Quay is the Mill.

This working mill, next to the Morden Stream, is an atmospheric reminder of the recent past when corn was ground here for the local community. It’s believed that mills have worked in the Tamar valley since medieval times and this watermill dates back to the 19th century. The buildings surrounding the mill were used as stables, cowsheds, a hayloft and a ‘cherry house’ for storing cherries. The last of these buildings was added in the 1890s and they are now set up as a selection of estate and craft workshops.

The mill produces wholemeal flour, which is used at the Barn Restaurant and The Edgcumbe, and is on sale at the mill reception and in Cotehele’s shop. A range of outbuildings includes re-creations of wheelwright's, saddler's and blacksmith's workshops along with a traditional furniture maker and a working potter.

A hydro-electric scheme, which you can see beyond the waterwheel, generates clean, renewable electricity that goes to the national grid.

* See website for details of opening times and prices