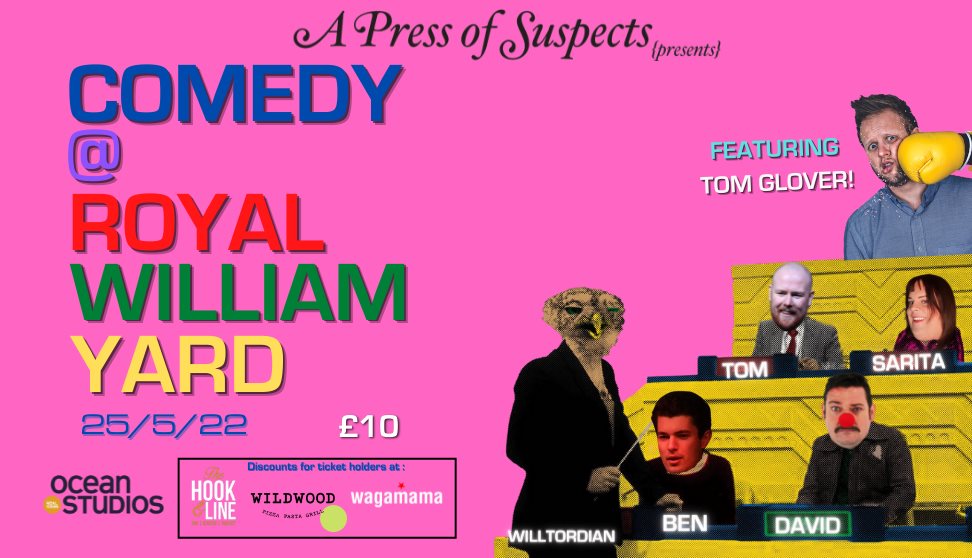 Local Plymothian promoters A Press of Suspects return with their monthly Comedy event to the beautiful and historic Royal William Yard. In conjunction with Real Ideas organisation the night will take place in the lovely Ocean Studios Café on 25th May with headline act Tom Glover.
Local restaurants at The Yard are also offering up some discounts for ticket holders so you can grab a bite to eat before the show! Wagamama are offering 10% and WildWood are offering a staggering 30% off your final bill! The line-up for the night is as follows:

TOM GLOVER: Loveable West Country favourite Tom Glover is a highly sought-after act and MC, capable of bringing laughter to any room. Tom combines tales of fatherhood and country living with hilarious observational routines on daily life. In recent times Tom also finished runner up in the prestigious Lastminute Comedy Club Comedian of the Year and reached the finals of the Inaugural Petfringe Comedian of the Year. His infectious personality and playful approach make him an instant hit with audiences, however Tom is perhaps best known for his excellent crowd work and quick wit that have earned him a number of regular compere roles at major venues across the South West. He's had two successful runs at the Edinburgh Fringe Festival with split shows and his debut full length solo show was nominated for Best New Show at the 2019 Leicester Comedy Festival Awards.

David Arnold: A Welsh man by birth but Plymouth based for 10 years (married a Janner), David is a regular on the comedy circuit, mixing mainstream and alternative material with aplomb! A warm and engaging presence, David has recently won through to the finals of British Comedian of the year! An absolute treat of a man. www.welshdavecomedy.com

Also on the bill will be 3 up and coming Cornish comics:

Sarita Hunt:A born and bred Cornish maid, her comedy is based on her intriguing journey of a life filled with extreme highs and lows. She will show you the lighter side of some dark life experiences, exposing the fascinating world of being a transgender woman in a small town.

Tom Rodgers: A regular on the South West comedy circuit, this Cornish man with tickle your ivories with his tales of Cornish living and poo filled wetsuits.

Willtordian Ballorian Edwardian: A man with a penchant for owls and a celebration of the absurd silliness of life! Expect chaos, music, prizes and owls....

Tickets are £10.00 which is an incredible price for this line-up.