You are here: Home > What's On > Tavistock Court Comedy Club 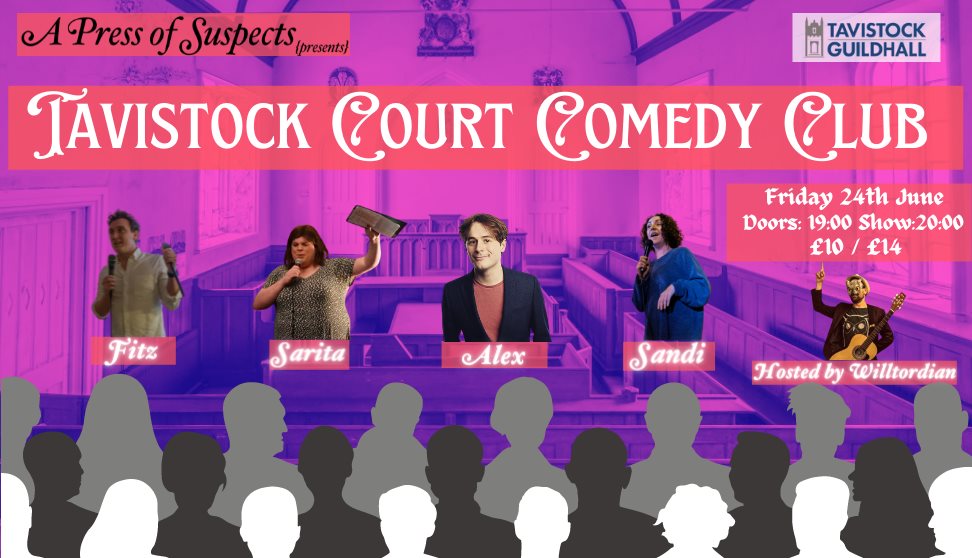 Comedy in Tavistock is back. Again! After March and May's successful shows, Plymouth based promoters "A Press of Suspects {presents}'' are returning to bring their unique brand of comedy night to good ol' Tavy!
Taking place in the unusual setting of the old Courtroom at the reopened World Heritige Guildhall on the 24th June.

This night promises to be a bundle of laughs with a great varied line up with four fantastic comics. Tickets either £10/14, pay what you can afford - you'd be a fool to miss out . All hosted by the anarchic, owl obsessed Willtordian Ballorian Edwardian.

Alex Kitson: "Alex Kitson is an "on the money funny" award-winning stand-up comedian, performer and writer. New on the comedy scene in 2018 he has performed across the UK, written for both the BBC ('Incredible... So clever' - BBC Radio Bristol) and online content with millions of views. He has been on bills alongside Russell Howard, Jon Richardson, Nish Kumar, Seann Walsh, Rosie Jones, Mark Watson, Fin Taylor and Jayde Adams among many others and reached the final of First Laugh 2020, New UK Online Comedian of the Year 2020, and the top 12 of Jason Manford's New Act Competition in 2019. He also performed in two five star runs at the Edinburgh Fringe with the Bristol Revunions ('The entire ensemble is hilarious. Properly, effortlessly, hilarious' - EdFringe Review). In 2021 after the pandemic he took his first hour of stand-up around the country to critical acclaim in Southampton, Brighton, Exeter, Bath and Bristol. Culminating in a sell-out show in Bristol and winning the Bath Comedy Festival Award for Best Joke 2021.

Sandi Smith: Sandi began performing in 2013 telling her stories with acerbic wit whilst managing to maintain a warm connection with her audiences. In her first six months of performing, she reached the semi final of Funny Women and the heats of the BBC New Comedy Awards.Deceptively spacious, she must be seen to be appreciated. Sandi is a breath of fresh air to stand up comedy, she's very very funny and so good for someone so new to the circuit, see her now before you have to wait for returns to her future sell out shows! Patrick Monahan - "Very good indeed" . "Great material and audiences love her" . Nick Page

Sarita Hunt: A born and bred Cornish maid, her comedy is based on her intriguing journey of a life filled with extreme highs and lows. She will show you the lighter side of some dark life experiences, exposing the fascinating world of being a transgender woman in a small town.

Daniel FitzHenry: Daniel (or Fitz as he is known) first took to the comedy stage in 2011 and has since appeared at numerous comedy clubs, festivals and corporate events, including as official tour support for Canadian one liner king Stewart Francis. With a natural stage presence and a genuine desire to make people laugh, he has the ability to charm any crowd. "Did a BRILLIANT job!" – Stewart Francis "A great new talent who's interaction with the audience is flawless. Sharp, witty and charming and very bookable" – Scallywags Comedy "A natural storyteller whose gift of interaction and winning over audiences shines through, disarming the coldest of hearts." – Submarine Comedy

In a time where we are all looking for a little escape, this show is a great way to have a giggle and actually meet up with friends in real life.