You are here: Home > Things to Do > Messenger 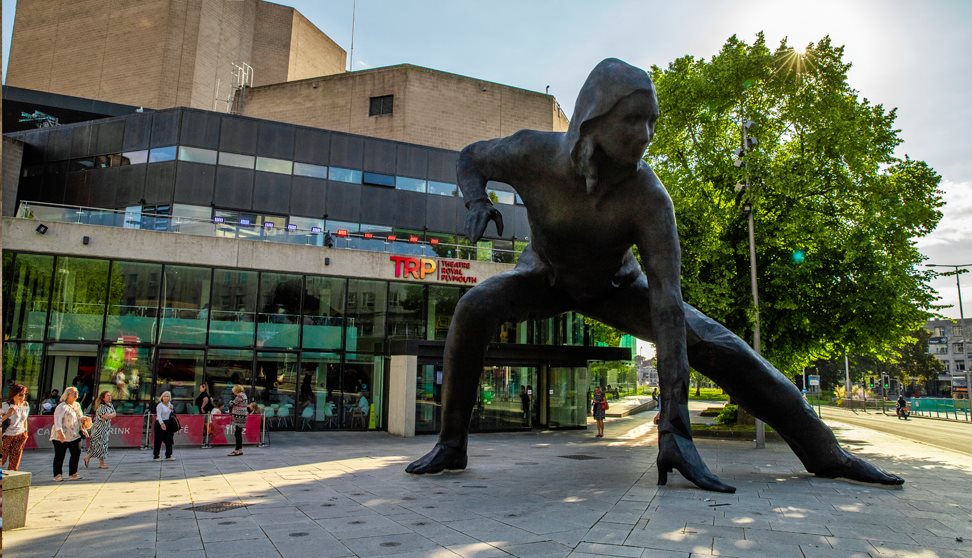 Joseph captures 3D images of actors while they rehearse Othello, TRP’s award-winning co-production with Frantic Assembly. From these, he creates sculptural figures.

The idea to turn one of these dynamic figures into a large-scale sculpture which will stand outside the Theatre is born.

The vision for a 7-metre tall bronze sculpture is unveiled to the press and public in October 2016.

Later that year, work gets under way.  A skilled team of craftspeople at Castle Fine Arts Foundry in Wales begin the centuries-old lost-wax process of bronze casting.

Exactly two years after plans for the sculpture were announced, Joseph Hillier reveals her name: Messenger.

Messenger leaves Castle Fine Arts Foundry in sections and is transported to Plymouth by road. The sections arrive at Her Majesty’s Naval Base, Devonport where they are painstakingly welded together by a small team of workers who have travelled down from the Foundry. The fully assembled sculpture is now given its final finish.

It is only right that Messenger’s arrival into a great maritime city should be by sea. As she sails by barge across Plymouth Sound to Millbay Docks, local and national press are there to witness and document her journey.

Once ashore, she is craned onto a low-loader. As she makes her way through the city streets at a stately pace, crowds of onlookers get their first glimpse of her. Many of them record the moment on their phones.

As she approaches Royal Parade, crowds of school children gather to welcome her and watch as she is gently craned into position outside the Theatre.

Messenger is lit up for the first time.

There to switch on the lights on is Nicola Kavanagh, the actor whose fleeting movement inspired Messenger’s creation.