You are here: Home > Things to Do > Plymouth Naval Memorial 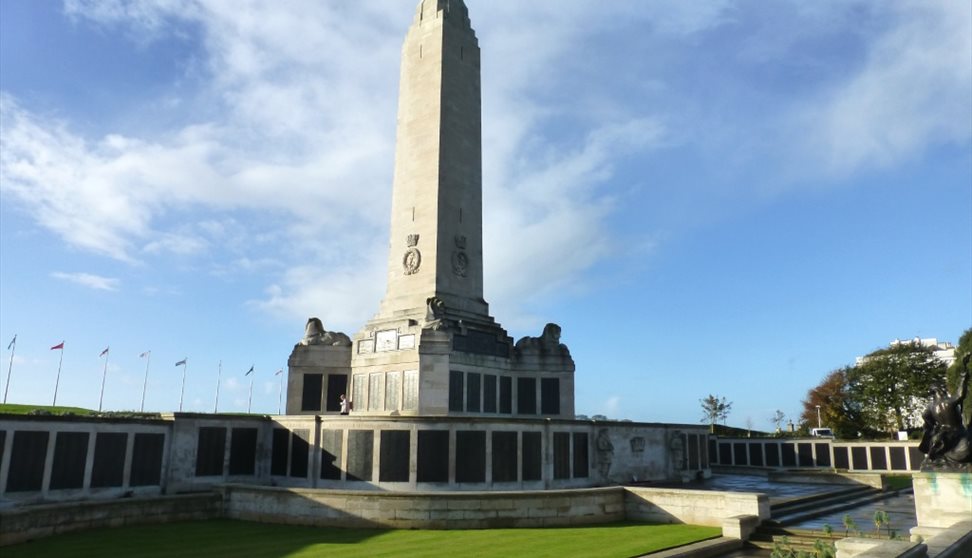 The Memorial is situated centrally on The Hoe which looks directly towards Plymouth Sound. It is accessible at all times. Copies of the Memorial Register are kept at the Tourist Information Office at Island House, 9 The Barbican, Plymouth, PL1 2LS, and also in the Naval Historical Section at Plymouth Library.

Disabled access to the First World War section of the Memorial is possible via the Hoe at the front of the Memorial. The Second World Was section of the memorial is however only possible via steps making access for people with limited mobility difficult. For further information regarding disabled access, please contact our Enquiries Section on 01628 507200.
Visitors are kindly requested not to 'embellish' inscriptions on the memorial using chalk or abrasive products in order to enhance them for photographic purposes. Previous incidences of this have damaged the panels.

After the First World War, an appropriate way had to be found of commemorating those members of the Royal Navy who had no known grave, the majority of deaths having occurred at sea where no permanent memorial could be provided.

An Admiralty committee recommended that the three manning ports in Great Britain - Chatham, Plymouth and Portsmouth - should each have an identical memorial of unmistakable naval form, an obelisk, which would serve as a leading mark for shipping. The memorials were designed by Sir Robert Lorimer, who had already carried out a considerable amount of work for the Commission, with sculpture by Henry Poole. The Plymouth Naval Memorial was unveiled by HRH Prince George on 29 July 1924.

After the Second World War it was decided that the naval memorials should be extended to provide space for commemorating the naval dead without graves of that war, but since the three sites were dissimilar, a different architectural treatment was required for each. The architect for the Second World War extension at Plymouth was Sir Edward Maufe (who also designed the Air Forces memorial at Runnymede) and the additional sculpture was by Charles Wheeler and William McMillan. The Extension was unveiled by HRH Princess Margaret on 20 May 1954. A further unveiling took place on 11 November 1956, when panels 101 to 103 honouring those who died on shore, but who had no known grave, were unveiled by Admiral Sir Mark Pizey.

In addition to commemorating seamen of the Royal Navy who sailed from Plymouth, the First World War panels also bears the names of sailors from Australia and South Africa. The governments of the other Commonwealth nations chose to commemorate their dead elsewhere, for the most part on memorials in their home ports. After the Second World War, Canada and New Zealand again chose commemoration at home, but the memorial at Plymouth commemorates sailors from all other parts of the Commonwealth.

Plymouth Naval Memorial commemorates 7,251 sailors of the First World War and 15,933 of the Second World War.