You are here: Home > What's On > 60th Anniversary of the Commando Gunners Military Parade 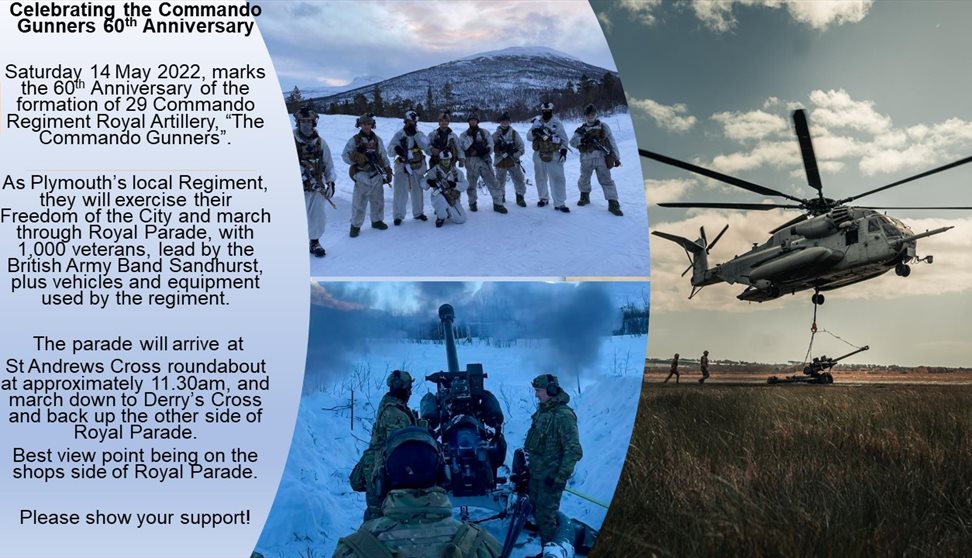 Plymouth will be celebrating the 60th anniversary of the Commando Gunners with a military parade in the city centre. It is expected that serving troops from 29 Commando Regiment Royal Artillery and over 1000 veterans will march along the iconic Royal Parade, on Saturday 14 May 2022, exercising their Freedom of the City. Led by the Regiments’ colours, their towed guns; the parade will also include the marching band, British Army Band Sandhurst, plus vehicles and equipment used by the Regiment.

Please come and support the City’s local unit on a momentous occasion in an event which reflects Plymouth’s long standing ties with the Armed Forces. Find all the info you need here.

It will be a spectacular event, come along and show your support!

The event is open to all retired ranks (including attached arms) who served in the Regiment from the formation in 1962 until the present day. For more information regarding veteran’s attendance, please contact the Commando Gunner Regroup Secretary, Bill Pinter at billpinter829@yahoo.com
​​​​​​

If you have a city centre business, to help manage the event and reduce disruption it would be greatly appreciated if you could reorganise deliveries and to let your delivery companies know.

Should you have any queries please email: ellen.davis@plymouth.gov.uk