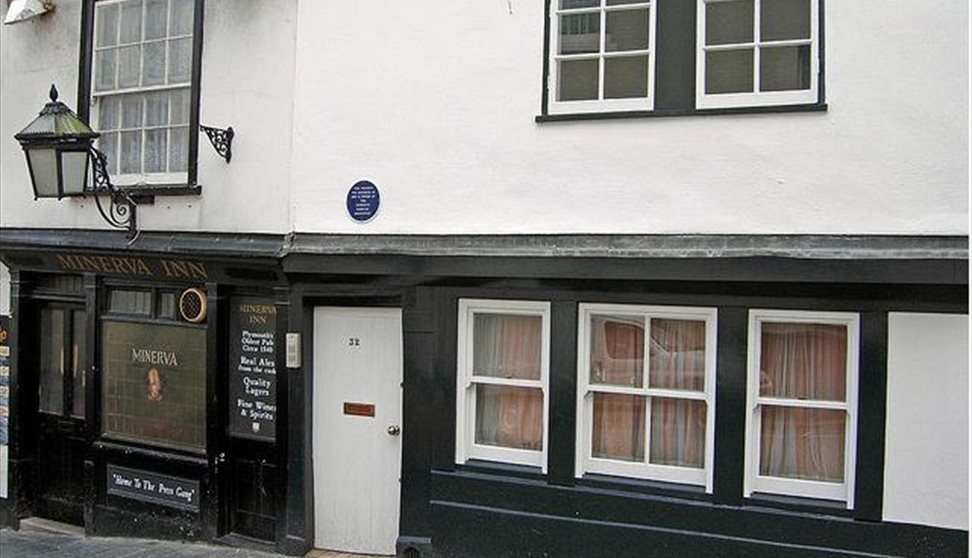 Welcome to The Minerva Inn. A warm welcome awaits you from Martin and his staff who took over The Minerva in June 2007.

The Minerva is situated in Looe Street, in the Barbican area of Plymouth, located close to the town centre and bus station.

The pub holds live music nights 3 times a week and a Jam night every Thursday, which is free for all budding musicians to sharpen their strings, whistles or vocal chords! Why not pop along on a Monday night and try the weekly quiz?

The Minerva Inn was named after the Goddess Minerva. Minerva was the daughter of Jupiter and Metis.  She was considered to be the virgin goddess of warriors, poetry, medicine, commerce, wisdom, crafts and the inventor of music.

The Minerva Inn is Plymouth’s oldest serving public house, circa 1540. One of the previous owners was The Octagon Brewery, which traded in Martin Street, Plymouth between 1861- 1970, its emblem remains on the stain glass window on the front of the premises.

In the 17th Century the Minerva was home to the Press Gang and stories of secret tunnels and doorways are still evident within the timber walls. There is a small stairway peephole where the Press gang would look out for potential sailors entering the establishment and drop the Kings shilling in to their beer, if the unsuspecting patron drank from the beer then they had accepted the Kings shilling and were taken off to join the navy, anyone not complying would be taken by force, usually with a blow to the head and then taken off to a ship, by the time they had regained consciousness they would be out at sea.

Plymouth’s most famous seamen Sir Frances Drake had a home on Looe Street , on the Site which is now Bigga Records, so it is more than likely he would have visited the pub The Pub is timber framed and a lot of the timber is from the Spanish Armada Fleet. There is a spiral staircase leading to the private residence which in the centre hosts the Mast from one of the fleet.

The Minerva always has a welcoming friendly atmosphere, yet occasionally there has been felt a ghostly presence. First hand experiences in recent years have included a levitating spoon, numerous instances of the cellar gas being turned off, the juke box playing after it has been switched off, and a small figure standing at the bar. There are other ghostly tales from past landlords and locals of a couple of prostitutes sitting directly under the dart board where the original entrance door was , and our pet dogs don’t seem keen on that area of the pub, so maybe they sense something too.

We look forward to welcoming you to the Minerva Inn!