You are here: Home > What's On > Plymouth Armed Forces Day 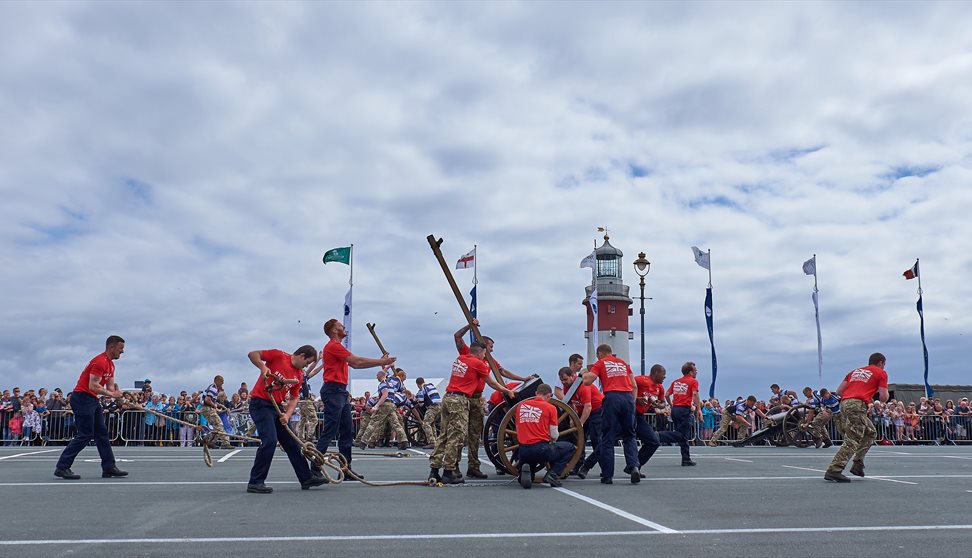 Plymouth Armed Forces Day will be returning on Saturday 25 June 2022, with an exciting day for all the family to enjoy, and celebrate our military and all the great work they do.

Armed Forces Day is a fantastic opportunity for everyone to come along and show their support for the men and women who make up the Armed Forces community from currently serving troops to reservists, veterans, cadets and their families.

​The whole family will have a great day out at Plymouth Armed Forces Day, in association with Babcock, on Saturday 25 June. Head to Plymouth Hoe for a day filled with excitement and fun, all for free.

​Starting at 9.10am with an RAF and Allied Forces memorial service, Armed Forces Day will officially open at 10am and run until 10.30pm, with plenty of activities, displays, parades and live music to enjoy.

There will be activities for all the family to enjoy and get involved in, from exploring military vehicles, weapons displays and equipment, to tackling the Royal Marine’s obstacle course, or the Army’s climbing wall. Explore the dynamic displays in the Royal Navy Village, and chat with the RAF recruitment team to learn more about the wide range of careers on offer, from Aircrew to Chef!

​Members of the Fire Service, Devon and Cornwall Police, Coastguard Rescue Service and Dartmoor Search and Rescue will also be there on the day.

​The Veterans Village will include a wide range of charities and organisations, each offering information, advice and support.

​You’ll find the main arena along the Hoe Promenade, with an exciting programme of awesome activities, bands and parades. At 11am the annual Parade of Standards will take place, which includes Veterans and Cadets marching across the Hoe Promenade.

Other highlights include the Devonport Services Rugby Team, who will be showing off their skills and a thrilling exhibition match from Team Endeavours Punishers Wheelchair Rugby.

There will also be entertainment from the City of Plymouth Pipe Band, Military bands, Cadets marching and a lively performance from the Rock Choir, the largest community choir in the country.

This year we have up to 20 schools taking part in the Junior Field Gun tournaments. This exhilarating competition will be taking place throughout the day, within their dedicated arena.

​The Plymouth Music Education Hub will be providing a spectacular programme of live music by their talented young local musicians, who will be carrying out a variety of performances throughout the day on their dedicated stage.

40th Anniversary of the Falklands War​

Veterans of the Falklands War will be given the Freedom of the City of Plymouth. The honour will mark the 40th anniversary of the conflict and the contribution of the city's service personnel.

Plymouth will be marking this significant anniversary with a dedicated Veterans parade, during Armed Forces Day, which will start at 2pm from the Royal Citadel, finishing on the Hoe promenade with a salute and speeches.

Veterans from the Falklands are invited  to join this parade, please contact Chris Jones for more details, email: c.jones795@btinternet.com

​The entertainment continues into the evening, with a free live outdoor music concert on the main stage, sponsored by C&G Catering.

The Armed Forces flag will be raised outside the Plymouth Guildhall on Monday 20 June 2022, at 10am at a formal ceremony, marking the start of Armed Forces Week. The flag will fly in Plymouth all week in celebration of our military personnel, past and present.

On Thursday 23 June 2022, also on Plymouth Hoe, you will be able to show your support and admiration to the athletes in the Rehabilitation Triathlon, hosted by the Royal Marines.

This exciting event will include a swim in the art-deco Tinside Lido, followed by cycle time trials, and then athletes move onto static rowing machines on the Hoe promenade before crossing the finishing line.

Find out more about the Rehabilitation Triathlon