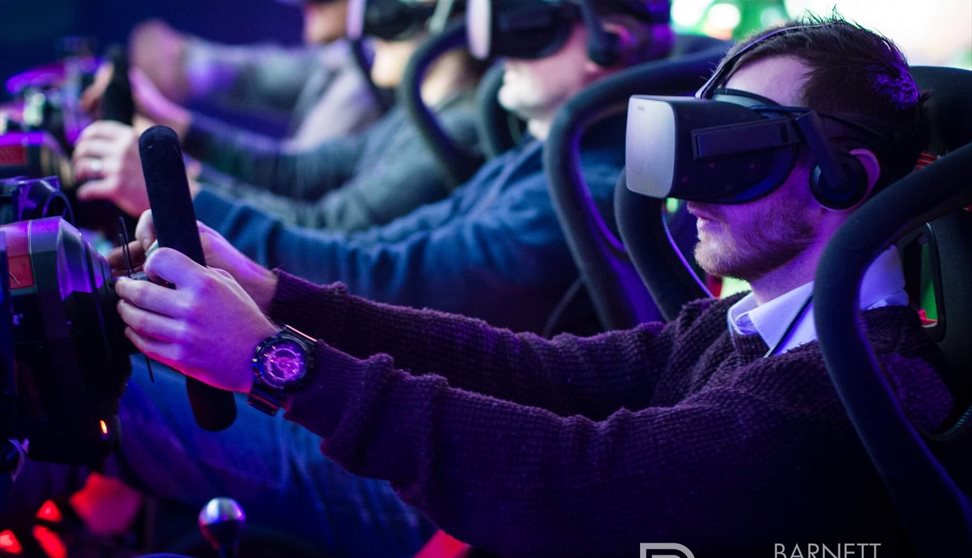 Player Ready Virtual Reality (VR) is a centre which contains the latest Virtual Reality equipment which is used to transport the guests into a range of games and even educational experiences.

These experiences can be in the form of Escape Rooms where a team of players works together to escape from Ancient Pyramids, Haunted Mines or transported back to Ancient Greece, Persia or even into the Chernobyl disaster.

We have games aimed at younger children aged seven and above and games which will entertain the most blood thirsty gamer.

Virtual Reality isn’t just for gamers as the technology puts you into the game, you only need simple controls as you move your head, body and hands to move around, duck and explore new virtual worlds.

Our popular games include TowerTag a simple VR take on LaserTag arenas but set in an amazing futuristic landscape. Arizona Sunshine is a Zombie battle or co-operative Zombie which is always popular with teens and adults.

With eight Virtual Reality systems in our Plymouth store we can support groups or you can come alone to explore our fantastic library of single player games such as Fruit Ninja, SuperHot VR and Creed Boxing.

If you are into Racing our new racing simulator centre here in Plymouth will blow your mind. Our simulators also feature the latest in Virtual Reality to immerse you into the car. You can look around the car, check your mirror or look over your shoulder as you race against the computer or a family member.

Our simulators can recreate go-karting and has dozens of accurate recreations of worldwide karting tracks. As well as more serious racing such as Formula X, Rallycross and Street Racing.

Here at Player Ready our simulators can feature 5D SFX which simulate vibrations of the track and motion of the car as you hit insane speeds. Its 100% safe to race in a simulator and can be done any time of day or night.

Our gaming suite full of Xbox Consoles is the perfect add-on for a birthday party or to compete with your friends on the latest console games.

Player Ready has stores in other parts of the UK and an events team that tours the UK.